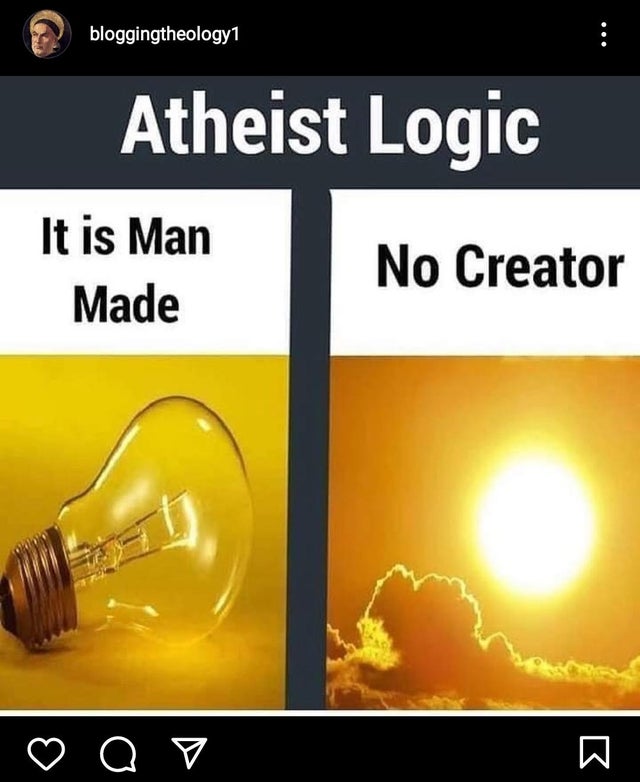 Look at the formation and the destruction of thousands of Stars (which are even bigger than earth) every day. There is no logic behind this formation and destruction which has been happening for the last 14.8 billion years. This happens only when Design is not INTELLIGENT, but RANDOM.

Adam came to this earth only about 6 thousand years ago (both according to Bible and Islamic Ahadith).

Look at the death and destruction of billions of species before the advent of humans. 99% of those species were born and then vanished without any purpose. This happened only Design is not INTELLIGENT, but only random.

And now look at a mobile phone. You will not see even a SINGLE part there which is useless and has no function. This is known as Intelligent Design.

We don't think a light bulb has a "creator" just because it is "complex".

We think that a light bulb has a creator because every light bulb we've ever seen has been built by humans. We've never once stumbled upon a light bulb growing out of a tree.

But we've never seen Allah making a star. In fact, we have plausible explanations for how a star could form from undirected natural processes -- at least back until the Big Bang.

I will quote PB Shelley, "design must be proved before a designer is inferred."

On the left side, we have a light bulb which we know is designed. On the right hand side, we have a heavenly body, a star or it could be that ugly rock lying by the side of the road, a random cloud, a galaxy, a tree - anything existing in nature through natural processes. Is that ugly rock, that half broken tree, that random cloud designed? You will never find a Muslim or any other religious man making the same argument as in the shared picture for an ugly piece of rock, a broken tree or a random cloud. Why? Because anything that seems aesthetically less pleasing to their eye, and functionally redundant appears as lacking design. Now when they see a star or moon or an image of a spiral Galaxy, these appear designed to them partly because of the aesthetic beauty or functionality. But, as Shelley rightly argues, you must prove the design before you infer a designer. They haven't even proven the design, yet they infer a designer. That's a leap of faith. Aesthetic and functional reasons are not sufficient to prove design. The Conway's game of life starts out with a few rules and a very simple configuration, yet after hundreds and thousands of iterations, complex shapes and dynamics emerge. These shapes seem pretty pleasing to the eye aesthetically, and may seem to possess a specific function, yet there is no secret design or designer involved.

Muslims logic: Everything has a creator

Humans: has a creator

Allah: has no creator

It is in itself a fallacy, they apply it to a simple light bulb, but not to their god.

And even if we assume that someone created this universe, this still doesn't prove that the Creator is Allah. What's the fault in thinking that it might also be Zeus or Odin or Amaterasu or whatever deities that other people from other religions believe in? Heck, what if the entire universe was made by an extremely advanced alien civilization?