Original War Rulings of Islam, and the lies/deceptions of Muslims

Muslim claims the following about the war rulings in Islam: 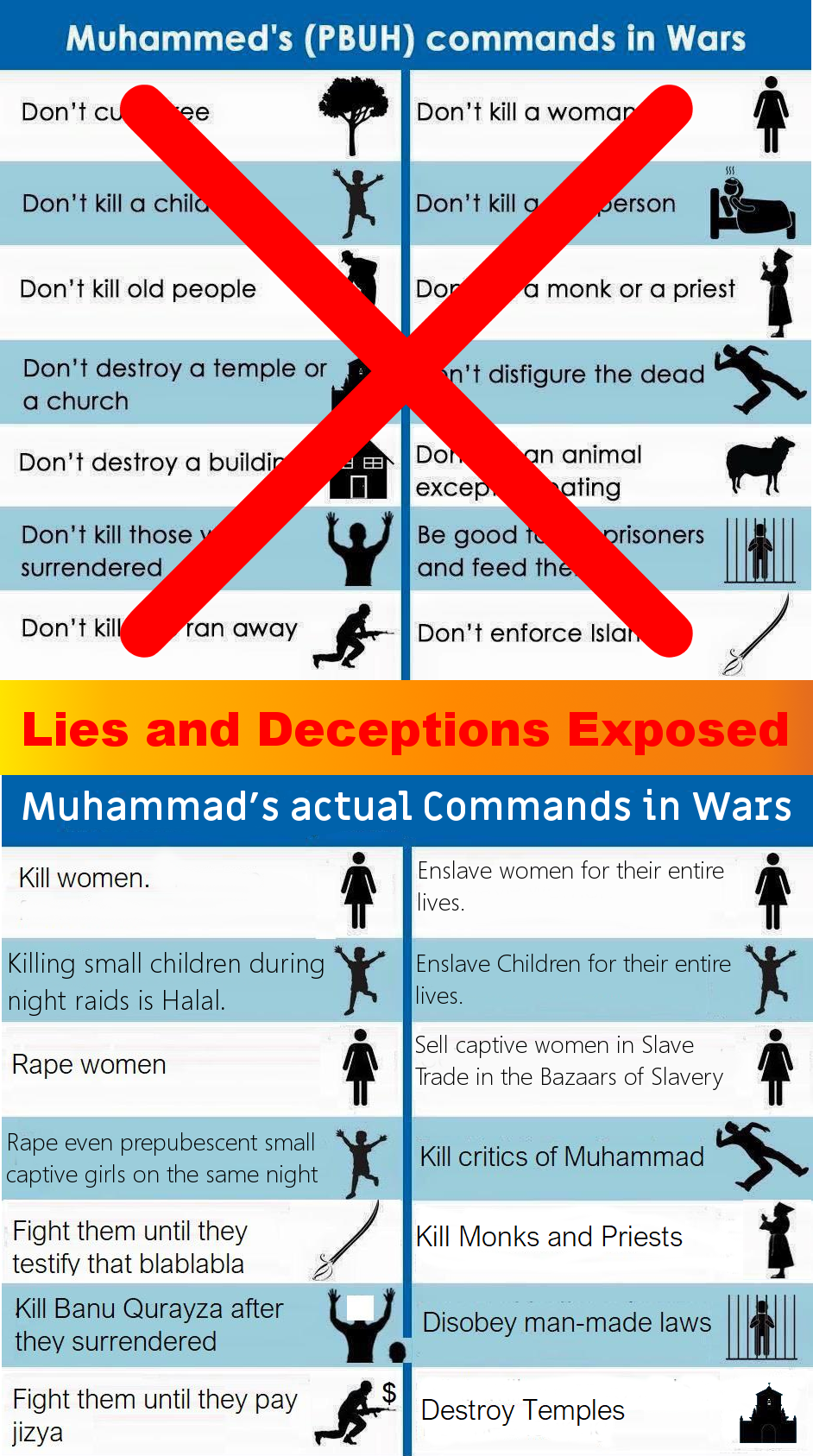 Nevertheless, these are lies, and the reality of Islam is ugly.

Killing of PRISONERS (those who surrendered)

Muslims today do a false propaganda that killing of prisoners (who surrendered) is not allowed.

But this is a lie as Muhammad himself killed 800 men of Banu Qurayzah, who surrendered and accepted to become prisoners of Muhammad.

And it was not an exceptional case, but Quran is itself a witness that slaughter of prisoners is necessary upon the prophet:

(Quran 8:67) It is not fit for any prophet to have captives until he has made slaughter of them in the land. You desire the frail goods of this world, while Allah desires (for you) the hereafter

Muhammad also ordered to kill ALL the old captives

This Muslim article claims that Islam forbade to kill the old and women and children. But this is not true regarding the old men.

Old men were not useful as slaves (to do work). Thus, Muhammad ordered to kill all the old captives and to not let them alive as slaves.

Narrated Samurah bin Jundab: That the Messenger of Allah (ﷺ) said: "Kill the elder men among the idolaters and spare the Sharkh (young male children under the age of 12) amont them."

And the Sharkh are the boys who did not begin to grow pubic hair.

This same Hadith has also been recorded by Imam Ahmad bin Hanbal, from another chain of narration, with his comments.

Samurah said that Prophet said: Kill the elder men of Mushrikeen, and spare the Sharkh (boys under the age of 12). The son of Imam Ahmed asked his father about this Hadith, and he further cleared that an elder old man does not normally accept Islam, while the chances of young person accepting Islam is much more than an old man.

Muhammad killed all the elder man in the incident of Banu Qurayzah, but spare the young boys (under the age of 12).

Yes, Muhammad ordered not to kill women, but to loot them, and to make them slaves and compel them to provide sex services whole of their lives

Women were innocent. They had no part in the decisions of wars. They neither participate in the wars nor killed any Muslims. But despite this, Muhammad ordered to loot all the women too, and then to make then slaves.

0 Abu Sa'id al-Khadri said: We went out with Allah's Messenger on the expedition to the Bi'l-Mustaliq and took captive some excellent Arab women; and we desired (to have sex with) them, for we were suffering from the absence of our wives, (but at the same time) we also desired good ransom money for them by selling them). So we decided to have sexual intercourse with them but by observing 'azl (i.e. withdrawing the male sexual organ before emission of semen to avoid-conception so that they don’t become pregnant). But then we said: We are doing an act whereas Allah's Messenger is amongst us; why not ask him? So we asked Allah's Messenger, and he said: (Yes, it is allowed, but) it does not matter if you do it or not, while if any soul has to be born up to the Day of Resurrection, then it will be born.

Young Children were also made slaves for the whole of their lives.

Young and small girls and boys (under the age of 12)  had no role in the wars against Muslims, but still they were also made prisoners for the whole of their lives, and were compelled to serve their Muslim masters for rest of their life.

Even worse, the coming generations of these slave children were also born automatically as slaves too. It was due to the EVIL of "Slavery by Birth" in Muhammad's Islam. Please read more about this "Slavery by Birth" in Islam in our article: Part1: Evils and Crimes against Humanity of Islamic Slavery

Killing Children during the raids

It is narrated by Sa'b b. Jaththama that he said (to the Holy Prophet): Messenger of Allah, we kill the children of the polytheists during the night raids. He said: They are from them.

Sahih Bukhari, Hadith 3012:
Narrated As-Sab bin Jaththama: The Prophet (ﷺ) passed by me at a place called Al-Abwa or Waddan, and was asked whether it was permissible to attack the pagan warriors at night with the probability of exposing their women and children to danger. The Prophet replied, "They (i.e. women and children) are from them (i.e. pagans)." Prophet said: All the graze-lands belong to Allah and his prophet.

"Invitation to Islam" is not needed before attacking and killing the non-Muslims:

Sahih Muslim, Hadith 1730a:
Ibn 'Aun reported: I wrote to Nafi' inquiring from him whether it was necessary to extend (to the disbelievers) an invitation to accept (Islam) before meeting them in fight. He wrote (in reply) to me that it was necessary (only) in the early days of Islam. The Messenger of Allah (ﷺ) made a raid upon Banu Mustaliq while they were unaware and their cattle were having a drink at the water. He killed those who fought and imprisoned others.

Why this ruling of invitation to Islam and last chance to save themselves was abrogated? ... Answer is, only for the greed of more looting and more women and more grazelands.

Either accept Islam, or you will be beheaded

Please note that JIZYA was allowed only for the 'people of book' (i.e. Christians, Jews, Magians). As far as polytheists and all other religions were concerned, there was no JIZYA for them, but they had to accept either Islam or to be killed.

Islam Q&A is the largest Muslim Fatwa Website, which is run by the Saudi Salafi Scholars. It writes (link):

The kuffaar (i.e. polytheists) should be compelled to enter Islam if they are not people from whom the jizyah may be taken (i.e. from the people of book), because that will lead to their happiness and salvation in this world and in the Hereafter. Obliging a person to adhere to the truth in which is guidance and happiness is better for him than falsehood. Just as a person may be forced to do the duty that he owes to other people even if that is by means of imprisonment or beating, so forcing the kaafirs to believe in Allaah alone and enter into the religion of Islam is more important and more essential, because this will lead to their happiness in this world and in the Hereafter. This applies unless they are People of the Book, i.e., Jews and Christians, or Magians, because Islam says that these three groups may be given the choice: they may enter Islam or they may pay the jizyah and feel themselves subdued.
Some of the scholars are of the view that others may also be given the choice between Islam and jizyah, but the most correct view is that no others should be given this choice, rather these three groups are the only ones who may be given the choice, because the Prophet (peace and blessings of Allaah be upon him) fought the kuffaar in the Arabian Peninsula and he only accepted their becoming Muslim.

That is why ISIS took Jizya from Christians in Iraq, but didn't accept the Jizya from "Yazidis". Following Muhammad, ISIS slaughtered all the Yazidi men, and took all their women as slaves.

Jizya was enforced only in order to humiliate Jews & Christians

Pagans were compelled directly to accept Islam under the threat of beheading them otherwise.

While Jews & Christians were also compelled Indirectly to accept Islam by humiliating them through Jizya.

The Quran is clear about this humiliation through Jizyah.

O ye who believe! Truly the Pagans are unclean (/impure/filthy); so let them not, after this year of theirs, approach the Sacred Mosque ... Fight those who believe not in Allah nor the Last Day, nor hold that forbidden which has been forbidden by Allah and His Messenger, nor acknowledge the religion of Truth, of the People of the Book (i.e. Christians and Jews and Zoroastrians), until they pay the Jizya (tax) with willing submission, and feel themselves humiliated (Arabic: صَـغِرُونَ).

Here صَـغِرُونَ is an Arabic word, which means humiliation (link). This same word has also been used in Quran in verse (7:119) and verse (7:113) with same meanings of "Humiliation".

Ibn Kathir wrote in commentary of this verse 9:29 (link):

“(and feel themselves subdued.), disgraced, humiliated and belittled. Therefore, Muslims are not allowed to honor the people of Dhimmah or elevate them above Muslims, for they are miserable, disgraced and humiliated. Muslim recorded from Abu Hurayrah that the Prophet said, لَا تَبْدَءُوا الْيَهُودَ وَالنَّصَارَى بِالسَّلَامِ، وَإِذَا لَقِيتُمْ أَحَدَهُمْ فِي طَرِيقٍ فَاضْطَرُّوهُ إِلَى أَضْيَقِه (Do not initiate the Salam to the Jews and Christians, and if you meet any of them in a road, force them to its narrowest alley).”

Destroying Temple, and killing the priests

Sahih Bukhari, Hadith 4355:
Narrated Jarir: In the Pre-lslamic Period of Ignorance there was a house called Dhu-l-Khalasa or Al-Ka`ba Al- Yamaniya or Al-Ka`ba Ash-Shamiya. The Prophet (ﷺ) said to me, "Won't you relieve me from Dhu-l- Khalasa?" So I set out with one-hundred-and-fifty riders, and we dismantled it and killed whoever was present there. Then I came to the Prophet (ﷺ) and informed him, and he invoked good upon us and Al- Ahmas (tribe).

Sahih Bukhari, Hadith 4357:
Dhul-l--Khulasa was a house in Yemen belonging to the tribe of Khatham and Bajaila, and in it there were idols which were worshipped, and it was called Al-Ka`ba." Jarir went there, burnt it with fire and dismantled it. When Jarir reached Yemen, there was a man who used to foretell and give good omens by casting arrows of divination. Someone said to him. "The messenger of Allah's Messenger (ﷺ) is present here and if he should get hold of you, he would chop off your neck." One day while he was using them (i.e. arrows of divination), Jarir stopped there and said to him, "Break them (i.e. the arrows) and testify that None has the right to be worshipped except Allah, or else I will chop off your neck." So the man broke those arrows and testified that none has the right to be worshipped except Allah.

How long Islam apologists are going to hide this real face of Islam?