Did Quran really tell about the Big Bang?

Muslims claim that Big Bang theory was told in Quran:

(Quran 21:30) Have not those who disbelieve known that the heavens and the earth were joined together, then We parted them?

Then we have another Quranic Verse, which is telling that Earth was created first, and then the 7 heavens were created:

(Quran 41:9-12) Say (O Muhammad, unto the idolaters): Disbelieve ye verily in Him Who created the earth in two Days ?... Then turned He to the heaven when it was smoke... And He made them seven heavens in two days and to each heaven He ordained its laws, and then He adorned the lowest heaven with lamps of stars (i.e. Stars were created after the 7 heavens)

This Quranic claim is simply not possible while earth came into being about 9 billion years after the Big Bang.

So, there is a gap of about 9 billion years between the formation of the Universe/Heavens and the Earth. Therefore, Allah could have never set the heavens and earth apart while they were never together.

Thus, the Quran has been proved totally false in light of modern science.

This was only the ancient stories in many cultures that heavens and earth was together initially and then the gods separated them. The Quran only repeated those old stories.

Muslims were unable to answer about the gap between Big Bang and creation of Earth. Therefore, in order to save their face, they come up with a new claim that here Allah means from Earth only the "matter".

But this lame excuse does not stand a chance while in the very next verse, the Quran made it clear that it is indeed "Earth", while Allah forming on this earth things like mountains and highways.

(Quran 21:31) And We have set on the earth mountains standing firm, lest it should shake with them, and We have made therein broad highways 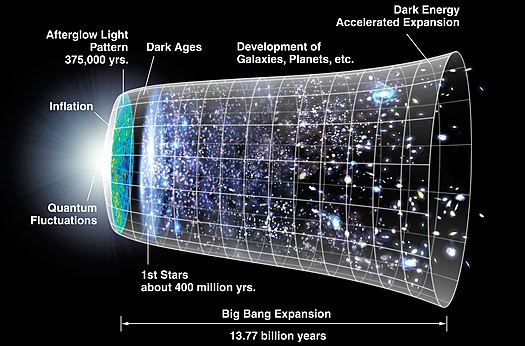