Why did the offspring of Adam stay in the 'stone age' for 290 thousand years (according to Muslims)? ⭐ ᵐᵘˢᵗ⁻ʳᵉᵃᵈ ⭐

Bible claims that Adam came about 6 thousand years ago. Similar claim was made by Muslims too:

Please read our detailed article: Adam came about 6000 years ago according to Islam

Nevertheless, Islam apologists had to deny that Adam came 6000 years ago.

Similarly, cave paintings have been found which have been about 64 thousand years old (link).

This is 30,000-year-old cave hyena painting found in the Chauvet Cave, France. 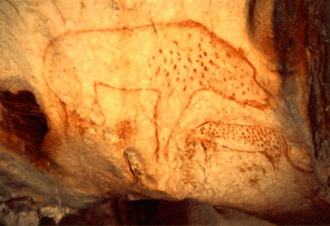 Thus, after these scientific findings, it became impossible for Islam apologists to accept that Adam came only about 6000 years ago. And they started claiming that Adam came at least 300 thousand years ago as the the fossils of modern humans suggest.

Scientific Proof: The "Stone Age" proves that Adam could not have come before 10 thousand years

Although Islam apologists were compelled to push back the date of arrival of Adam to 300 thousand years ago (due to the fossils of modern Humans), nevertheless, modern science caught their lie through "Stone Age".

The Stone Age started 2.5 million years ago, and ended only 10 thousand years ago.

The Stone Age is also divided into three different periods. Paleolithic or Old Stone Age: from the first production of stone artefacts, about 2.5 million years ago, to the end of the last Ice Age, about 9,600 BCE. This is the longest Stone Age period.

If we accept that Adam had already arrived 300 thousand years ago, as the fossils of modern humans suggest, then the question arises:

This theory of Islam apologists becomes so ridiculous only while they deny Evolution.

Neither Bible nor Quran knows that our ancestors were Hunter-gatherers for 290,000 years

Like the stone age, our ancestors also stayed as Hunter-gatherers for at least 290 thousand years, and they made the settlements only 10 thousand years ago.

A hunter-gatherer is a human living a lifestyle in which most or all food is obtained by foraging (gathering edible wild plants) and hunting (pursuing and killing of wild animals), in the same way that most natural omnivores do. In contrast to the agricultural societies, which rely mainly on cultivating crops and raising domesticated animals for food production

But there is no mention of Hunter-gatherers in Bible or Quran or any other religious book, while all these religions are much younger than10 thousand years and their founders didn't know about the history of their ancestors.

The evolution and domestication of the following 3 animals played a vital role in the beginning of Herding Culture:

Human settlements started due to the beginn of agriculture and herding about 10 thousand years ago. But before that, modern humans stayed as hunter gatherers for at least 290 thousand years.

Actually, according to Islamic stories, Adam and his offspring was cultivating crops and herding the domestic animals, and thus he was not a hunter-gatherer.

Please see verse 5:27 and its commentary by all Muslim Mufassirin, where they recorded multiple traditions how Qabeel (son of Adam) presented a part of his crops as 'sacrifice' to Allah, while the other son Habeel presented a sheep as 'sacrifice'.

For example, Ibn Kathir recorded this tradition and declared it to have a better than a good chain of narration (link):

Ibn Abi Hatim recorded that Ibn Abbas said -- that during the time of Adam -- "The woman was not allowed in marriage for her male twin, but Adam was commanded to marry her to any of her other brothers. In each pregnancy, Adam was given a twin, a male and a female. A beautiful daughter was once born for Adam and another one that was not beautiful. So the twin brother of the ugly daughter said, `Marry your sister to me and I will marry my sister to you.' He said, `No, for I have more right to my sister.' So they both offered a sacrifice. The sacrifice of the one who offered the sheep was accepted while the sacrifice of the other (the twin brother of the beautiful daughter), which consisted of some crops, was not accepted. So the latter killed his brother.'' This story has a better than good chain of narration.

It was narrated from as-Suddi, in his narration from Abu Maalik and from Abu Saalih from Ibn ‘Abbaas, and from Murrah from Ibn Mas‘ood, and from some of the companions of the Prophet (blessings and peace of Allah be upon him): No son was born to Adam but a daughter would be born with him, and the boy from this pregnancy would marry the girl from another pregnancy, and the girl from this pregnancy would marry a boy from another pregnancy. This continued till two boys Qabeel and Habeel were born. Qabeel was a grower of crops, and Habeel kept the livestock of animals. Qabeel was the elder one, and the sister that was born along with him was more beautiful than the girl who was born along with Habeel. When Habeel wished to marry the sister of Qabeel, then Qabeel refused to accept it and said: "She is my sister as she was born along with me, and she is more beautiful than your sister, and thus I have more right to marry her. But his father (i.e. Adam) ordered him to let Habeel marry her, but Qabeel still refused. And both of them offered a sacrifice to see who had more right upon that girl ... Habeel offered a fat lamb as offering, while Qabeel offered a sheaf of corn, but took out a big corn from it and ate it. Fire came down (from heaven) and consumed the offering of Habeel, but not that of Qaabeel [i.e., Haabeel’s offering was accepted and Qaabeel’s was not]. Upon that Qabeel became angry and he said: "I will certainly kill you, and you will not be able to marry my sister.
Grade: Sahih (Albani)

And cultivation of crops also started only about 10 thousand years ago in the Neolithic Period (after the end of ice age).

Nevertheless, both Bible and Quran are claiming that Adam started with agriculture as soon as he arrived on this planet earth.

Please see verse 5:27 and its commentary by Ibn Jarir Tabari (link), where he recorded multiple traditions how Qabeel (son of Adam) presented a part of his crop as 'sacrifice' to Allah, while the other son Habeel presented a sheep as 'sacrifice'. Or see the tradition by Ibn Kathir above regarding sacrifice of sheep and crop by sons of Adam.

Thus, cultivation of crops and presence of domestic sheep also proves that the story of Adam could not be older than 10 thousand years.

Bible and Quran knew nothing about the 'Ice Age'

The last ice age ended about 10 thousand years ago (link).

Neither Bible, nor Quran, nor any other religious book know anything about the Ice Age.

It is due to the reason while all religions are much younger than 10 thousand years. Thus, the human creators of those religions didn't know what happened thousands of years before them in form of stone age and ice age.

You will be surprised to know that humans first started the use of iron only 3500 years ago (link).

Humans discovered bronze some 5500 years ago. It is known as the Bronze Age.

While the Copper Age existed between the stone age and bronze age.

Noah's Ark and problems for Muslims:

According to the bible, the gap between Adam and Noah was 1056 years.

And this gap is the same according to Islam too. Saudi Salafi Mufti at Islam Question Answer wrote (link):

The period between Adam and Nooh (peace be upon them both): it was narrated from Abu Umaamah that a man said: “O Messenger of Allaah, was Adam a Prophet?” He said, “Yes, and Allaah spoke to him.” The man asked, “How much (time) was there between him and Nooh?” He said, “Ten centuries.” Narrated by Ibn Hibbaan in his Saheeh, 14/69; and by al-Haakim, 2/262. He said it is saheeh according to the conditions of Muslim, and al-Dhahabi agreed with him. Ibn Katheer said in al-Bidaayah wa’l-Nihaayah (1/94): this is (saheeh) according to the conditions of Muslim, even though he did not narrate it.

On one hand, the fossils of modern humans and other homos compelling Muslims to claim that Adam came at least 300 thousand years ago, but on the other hand they are unable to tell how Noah was able to make the whole Ark with stone and bones tools.

And the Quran claims that Noah was not in the stone age, but he was using wooden Planks and Nails.

Therefore, how was it possible for Noah to make such a huge ark millions of years ago, which carried all the pairs of animals of the whole world, and their food and water?

Even with the modern technology of today, the biggest ship, which is made out of wood, is only 100 meters long (link), even though not only a lot of iron nails have been used in it, but they also had to use steel wires in order to keep the planks together.

The oldest naval Ship is only 5 thousand years old

Next problem for Muslims is that science has discovered that the oldest naval ship is only 5 thousand years old (link).

It were Egyptians who started making the ships. But those ships were very primitive, where hulls were made in the planks, and then they were tied together with ropes, while they had no technology to make the nails.

These Egyptian boats were the most advanced boats in the world till 4000 to 5000 years ago.

Therefore, the question remains for Muslims, how Noah was then able to make such a huge ark millions of years ago with stone tools?

Islamic claim: Humans have been decreasing in stature (height) since Adam's creation, who was 60 cubits tall

Muhammad claimed that Adam was 60 cubits tall, and the height of humans have been decreasing since Adam's creation.

Narrated Abu Huraira: The Prophet (ﷺ) said, "Allah created Adam, making him 60 cubits tall ... Any person who will enter Paradise will resemble Adam (in appearance and figure). People have been decreasing in stature since Adam's creation.

Muhammad made such stories while he thought that no one was able to certify or deny such fairy tales.

But modern science proved Muhammad wrong, and indeed it beame able to certify or deny such fairy tales.

Scientists have found human fossils which are 300 thousand years old, but all of them have the normal height of present-day humans.

In fact, all the members of Homo family (whose fossils go up to 3.4 million years old) are of same height as modern humans of today.

Modern science has closed all the escape doors for Muslims: