Credit of earlier Muslim Scientists does not go to Islam/Quran/Hadith, but to the translated work of Greek/Roman scientists ⭐ ᵐᵘˢᵗ⁻ʳᵉᵃᵈ ⭐

Damages that Islam inflicted upon the Science

You could also read the following discussion about the Islamic Golden Age.

TLDR: Religious inspiration to learn (not unique to Islam, nor religion necessary), the inheritance and studying of pre-Islamic texts, government sponsorship of scholars, large trading networks bringing in new information and technologies - all very much helped spark the Islamic golden age, with contributions not just from Muslims (some of whom were controversial) but from non-Muslims too. The Islamic golden age paved the way for Europe to advance so far ahead today. After all, intellectual endeavours are often built on the works of neighbouring and past cultures, be they European, Chinese, Persian, Iraqi, Syrian, Roman, Greek, Indian etc. It's nothing to be embarrassed of, but celebrated: people learning and improving from each other. - Wiki's Islamic golden age article has a good overview of the causes and decline.

It's dishonest and misleading for many Muslims to attribute the achievements of the Islamic golden age period entirely or mostly to Islam/the Quran. As with most other intellectual endeavours (including today), they are often built upon the works produced by neighbouring and past civilizations.

The primary works that help to inspire the golden age period were the accumulation of pre-Islamic Greek, Roman, Persian, Mesopotamian, Levantine, Egyptian and Indian literature - translated largely by non-Muslims such as Hunayn ibn Ishaq, Yusuf Al-Khuri, Al Himsi, Qusta ibn Luqa, Masawaiyh, Patriarch Eutychius and Jabril ibn Bukhtishu.[1][2] It should also be noted some intellectuals were not only unbelievers but critical of Islam, such as Al-Razi, Al-Rawandi and Al-Marri. Whilst other Muslim intellectuals such as Ibn Sina/Avicenna, Ibn Rushd/Averroes, Al-Farabi, Omar Khayyam and more, were often at odds with Muslim orthodoxy, going as far as being labelled heretics and had calls for their works to be destroyed.

Amongst the various factors that contributed to the decline of the Islamic golden age period, such as the brutal and disastrous Mongol sack of Baghdad, there's still controversy on the extent of the decline influenced by the works of the Persian Muslim philosopher, Al-Ghazali.[4][5] Regardless, it's nearing a thousand years since, plenty of time for Muslims to dominate academia, art, literature, film, fashion, philosophy, science, technology etc especially with the advantage of modern education that's far more accurate and publicly accessible than a thousand years ago. But they don't dominate - except in birth rates or religious intolerance. This further confirms it wasn't purely or mostly Islam/Quran that created those great scholars, inventors, physicians, philosophers etc it was a more receptive tone towards learning and expanding upon non-Islamic works, ideas and individuals. Where as in today's era many Muslims may now try to steer clear of such foreign, deviant and perhaps 'blasphemous' non-Islamic ideas and individuals, for fear of doubts about Islam that may later fruit to disbelief e.g. many Muslim’s opposition to evolution (a significant part of biology) or a reluctance to study philosophy, because they perceive these to be unIslamic and or doubt inducing.

The Muslim world had indisputably excelled over the rest between the ninth and the twelfth century. This is because Muslims had overrun some of the world's greatest civilizations - Persian, Roman, Greek, Egyptian, Levantine, Mesopotamian, Indian, reaching as far as western China - incorporating their wealth, brains and accumulated their intellectual treasure. The Hellenic civilization, following the trail of Alexander's conquest, had moved eastwards from Greece to Alexandria and the Levant. Thus, the intellectual treasure of classical Greece also became incorporated into the Islamic world. Europe, battered by the so-called Barbarians from the North - the Vandals, Goths, Vikings etc and under obscurantist Christian influence, had sunk into darkness. Under these circumstances, which else could be the leading civilization of the world?

After the initial battering by zealous Arab Muslims, the vigorous pre-Islamic civilizations, which Islam had devoured, revived themselves in the vast Islamic world. It was mostly Persians, though Syrian and Iraqi Arabs and Assyrians as well as Andalusian Arabs and Berbers, also helped to rejuvenate and nurture intellectual and material endeavours in the Muslim world. The translation of foreign manuscripts, which was central for the medieval Islamic worlds excellence, was already occurring in pre-Islamic Persia. And in the Muslim period, the translations - patronized by the superficial Umayyads and wayward persianized Abbasids - were done largely by non-Muslim scholars, mostly Christians; very few of the translators were Muslims.

Given the restrictions of Islamic theology to the study of pre-Islamic and unIslamic ideas and individuals, little credit should go to Islam/Quran for the medieval Muslim worlds excellence; it must go to the pre-Islamic civilizations that Islamic states had violently appropriated and internalized.

Despite Muslim nostalgia for their golden age - a concept not unique to Muslim civilisations, other cultures have their golden ages too, that doesn't necessitate their respective religious beliefs are true - do today's Muslims mimic that past intellectual and scholarly dominance? Well if we see what the Muslim world produces today, it sadly seems to be more concerned with endless reinterpretations of their religious fiction, with the most popular works being "scientific, linguistic and numerical miracles" tripe, which comes with the irony in that most Muslims don't understand their own popular apologetics given the majority are not much literate in science, philosophy, linguistics, mathematics or history, certainly not from an impartial perspective. We can't also forget, their never ending disputes on who's the "true Muslim" and what new Islamic ways they can justify bigotry and violence towards perceived deviant Muslims who don't share their religious or political opinions, let alone towards Non-Muslims, let alone justify other harmful practices as slavery, slave rape, child marriage or how one should persecute gay people or the correct method on beating 'disobedient' wives with a toothbrush.[8]

Compare this with the non-Islamic/non-Muslim majority West and the rising East Asia, with their dominance in the endeavour of understanding the world around us and coming up with practical solutions to humanity's problems. Their dominance/influence in academia, engineering, fashion, films, invention, literature, science, technology, medicine etc - with some of these non-Muslim regions still continuing their hegemony in these fields for centuries or decades now, despite going through devastating wars and economic turmoils far worse than the Mongol sack of Baghdad!

"Why do the Christian nations, which were so weak in the past compared with Muslim nations, begin to dominate so many lands in modern times and even defeat the once victorious Ottoman armies?...Because they have laws and rules invented by reason" - Ottoman statesman Ibrahim Muteferrika, Rational basis for the Politics of Nations (1731).

Related reads: 'A thousand years before the coronavirus pandemic, Persian polymath, Abu Ali Sina (Avicenna), laid the foundation for modern quarantine. He angered clerics by recommending mosques to be closed. He also made several statements contradicting Islam and was declared an “apostate” by Muslim scholars.' 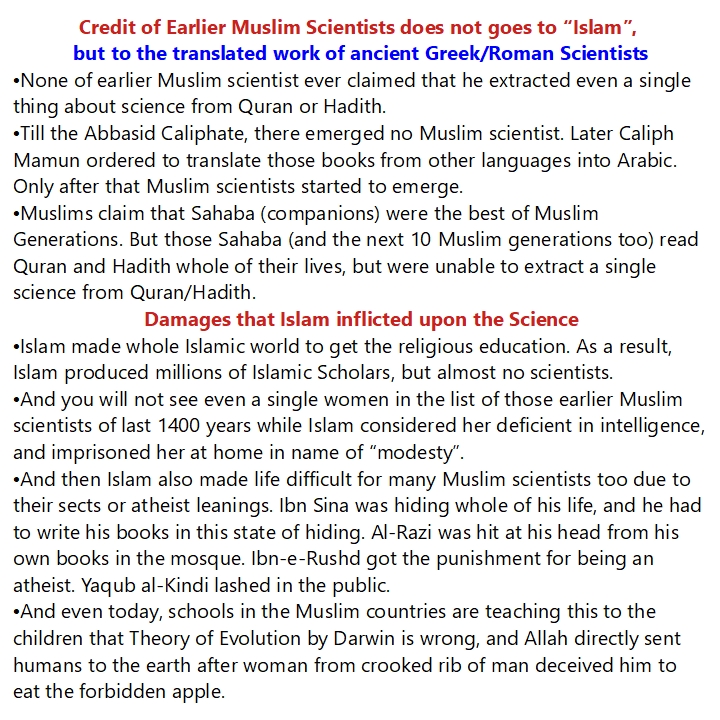