Halal Slaughter: Although scientific studies support Halal method, but still the CREDIT does not go to Islam

Drainage of blood through slitting the Blood Arteries is indeed a hygiene method:

(1) Drainage of blood during slaughter produces meat which is more tender, tastier and stays fresh for a longer time. Such meat has less microbial load (link to scientific study 1 and study 2)

(2) It is due to the reason blood contains germs, bacteria and toxins.

Thus, today Muslims are doing a lot of propaganda by showing these modern scientific studies and claiming: "Look Islam is the true religion, and Allah is all-Wisest", as Allah already knew which type of meat is best for Human consumption".

Even the educated people in the West are becoming totally confused when Muslims show them these scientific studies and they are becoming prey of this Muslim propaganda.

Unfortunately, these western people don't know the "real facts" which we will show later in this article, which exposes Islam completely and end this Muslim propaganda.

The CREDIT of Halal way of slaughter still does not go to Islam:

There are 2 major misunderstandings.

(1) Islam didn't invent the method of Halal slaughter (i.e. cutting the blood arteries in throat), but ancient Hunters invented it.
Slitting the blood arteries of throat (like in Halal slaughter) was an old practice. Before Islam, it was done by the per-Islamic Arabs and also by the Arab Jews who resided in Madina. And before Jews, it had already been done by the Hunters for thousands of years.
For cutting the whole throat in one strike (non-Halal Method), one needs a big heavy axe. But it was not possible for the hunters to carry such heavy axes during hunting where they had to chase the animals for many miles. Thus, hunters only carried knives with them during long chase, and thus slitting the blood arteries of throat was the preferred way of killing for them as compared to cutting the whole throat off.
Many people didn't even have knives, and they had to use sharp stones, and thus they were only able to cut the blood arteries of throat, and not the whole neck.
Therefore, CREDIT of present Halal method does not go to Islam, but to the ancient hunters.

(2) Muhammad*s intention/emphasis was not to "drain all the blood" through Halal method
Muslims claim Halal method drains all the blood, which makes meat better while blood contains germs, bacteria and toxins.
But again, it is a misunderstanding, while Muhammad's intention was not to "Drain All the Blood" during Halal slaughter, but Muhammad's emphasis was "flowing of some blood" as the "symbolic sign" of sacrifice in name of Allah.
It was only a co-incidence that it had already been a custom in pre–Islamic Arabia to use this method of slitting blood arteries which caused maximum drainage of blood.

Importance of "flowing blood" as "symbolic sign" for Muhammad as he followed the old Ignorant Arabic traditions:

Ibn 'Abbas reported that (during Hajj) Allah's Messenger called for his she-camel and cut the right side of it's bump (known as "Isha'ar in Arabic) and let the blood to flow from it (as symbolic sign of sacrifice), and then he tied two shoes round its neck (known as Qalada in Arabic).

Both of these two practices of "Isha'ar" (i.e. flowing of blood) and "shoes around the neck" belonged to the ignorant Arabic traditions of that time, and Muhammad continued following them as there existed no perfect Allah who could have stopped Muhammad on the spot in making every human mistake.

Both these practices of "Isha'ar" and "Qalada" are found in many other Prophetic Ahadith too e.g. (Sahih Bukhari, Muwatta Imam Malik etc.). This flowing of blood in the name of Isha'ar is still practiced today during Hajj and this Barbaric Act should be stopped.

Thus, the flowing of blood was a "symbolic sign" (just like saying Bismillah at time of slaughter).

You could also see this love affair of Muhammad with flowing of blood in the following tradition:

Sayyidah Ayshah (RA) narrated that Allahs Messenger said, “Of the deeds a man does on the day of sacrifice the dearest to Allah is the flow of blood (during sacrifice). It will come on the day of Resurrection with its horns and its hair and its hoofs. Indeed, blood will be accepted by Allah at once even before it falls on the ground. So, please yourselves with this flowing of blood!

Abu al-Ushara' reported on the authority of his father: He asked: Apostle of Allah, is the slaughtering to be done only in the upper part of the breast and the throat? The Apostle of Allah (peace_be_upon_him) replied: If you pierced its thigh, it would serve you.
Abu Dawud said: This is the way suitable for slaughtering an animal which has fallen into a well or runs loose.

This clearly shows that "flowing of some blood" was the main emphasis of Muhammad and not the total drainage of blood, and only due to this reason he allowed to slaughter the animal by piercing its thigh which obviously does not cause the maximum drainage of blood.

Sunan Abu Dawud, Book 10, Number 2848 (link):
Narrated 'Adi b. Hatim: I asked the Prophet (peace_be_upon_him) about featherless arrow. He said: If it strikes with its end, eat, and if it strikes with the middle part of it, do not eat, for it died by a violent blow (and caused no blood to flow).

Again, this proofs that Muhammad's intention was not maximum drainage of blood, but if the arrow hits the heart directly (or any other vital organ) and very little blood flew, still it is a Halal slaughter. Therefore, the flow of blood was a "symbolic sign" of sacrifice in the name of Allah.

Jews didn't slaughter camel as they are not allowed to eat camel meat.

Camels are slaughtered differently than cattle. It is known as 'Nahr نحر'. In this method, the person slaughtering the camel must thrust a knife into the hollow area between the camel’s neck and chest (cutting the arteries coming out of heart). This was the method, which was used by pre-Islamic Arabs for killing a camel, and Muhammad took this practice from them.

Pigs are also slaughtered in Halal way (just like Camels)

Pigs are also slaughtered through this method of 'Nahr', just like camels, but without taking the name of Allah.

The two arteries of pigs are cut which come out of heart (just like camels), which drains all the blood out of pig's body. 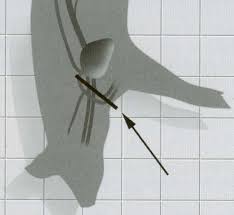 Ikejime - The Japanese way to kill a fish (Similar to Halal way, in oder to make fish free of blood)

Japanese fishers also found out that blood in dead fish destroys its meat and taste. But if they make fish blood free through the procedure of Ikejime, then fish stays fresh for longer periods of time and also it tastes better.

Here is a video about Ikejime.

Now the questions are:

But the so-called Allah didn't ask Muslims to slaughter fish in this way, while:

Today, Halal slaughter should only be allowed with the precondition of Stunning the animal first

Western countries allow Halal slaughter, but with the precondition of stunning the animal first. After that, it doesn't matter which method is used to slaughter the animal, as it is not going to feel the pain anymore.

Nevertheless, Muslim majority countries still oppose stunning before Halal slaughter, which is cruel and must be stopped. And the western countries should stop import of meat from any Muslim country which does not practice stunning method on the national level.