Ramadan Fasting: The Dark Side

Basically, Islamic Fasting is nothing else than:

Link to the full Scientific Study:

Does Ramadan fasting has any effects on menstrual cycles?

This study confirms that menstrual abnormalities including oligomenorrhea, polymenorrhea and hypermenorrhea increased during Ramadan especially in participates with more than 15 days of fasting.

If Allah is really all-Knowing, why didn't He then know that women's bodies are not made for fasting for 30 consecutive days, and it will harm some of them. These poor creatures suffered from it for the last 1400 years?

Due to the closed system for women in Islam, their problems and health risks due to fasting in Ramadan never came to light.

Every type of continued fasting is a risk for women. The Western world realized it first when intermittent fasting became popular. Some women started having all kinds of problems due to continued intermittent fasting (despite the fact that they are even allowed to drink water during the fasting time). And since the western system is not closed (in name of so-called modesty) thus the things came to light pretty quickly.

The experts are thus recommending women on intermittent fasting to not to fast on consecutive days, due to danger of their 'Hormonal Health' and 'irregularities in Periods'.

Because women’s bodies are biologically built for fertility and reproduction. Extended periods without food tell the body that now isn’t a good time for reproduction.

You might be thinking So what? I don’t want to get pregnant now or maybe ever. But fertility isn’t the only problem. Women need to consider that estrogen and progesterone do more in the body than simply get us pregnant. Estrogen helps us with metabolism, weight loss, mood, anxiety and stress, energy, bone density, and cognitive function, to name just a few.

Disease of irregular periods easy to determine for women, but other diseases due to hormonal imbalance and others are difficult to determine. The people of ancient times had no idea about them. Those diseases kept on making women more and more ill internally, and she even didn't know what wrong was happening with her body. But Allah should be All-Knowing, and He should be protecting women from it. Nevertheless, Allah acted in contrary direction, and made life of such women even more difficult through obligation of 30 consecutive fasting days of Ramadan.

Another study found out that Islamic Fasting during Ramadan is risky and could prove to be dangerous for the pregnant women.

Islamic Fasting has nothing to do with the “Intermittent Fasting”

Intermittent Fasting is about:

You stay more active throughout the day without eating, but without “drinking”, you become extremely weak and lazy and thus inactive, which happens exactly during the Islamic Fasting. Therefore, as far as active routine is concerned, then both Intermittent fasting and Islamic fasting are totally opposite to each other.

You will never hear that:

Not drinking water all day long has no benefits. Even the sunrise to sundown fasting has no benefits when you gorge yourself in the morning and evening. That is giving yourself massive insulin spikes which could be avoided by spreading your meal out. The Intermittent Fasting has nothing to do with Islamic fasting. It includes drinking water and the no food fast lasts longer than the Islamic one because that is needed to trigger autophagy.

Islam advocates claim that Muslims are not allowed to tell lies and to commit any other moral crimes during fasting, due to which Muslims and the Islamic Society becomes morally honest.

This argument is illogical.

According to Muslims, Allah is present there ALL the time, and not only during the fasting period. Therefore, if the fear of Allah all the time is not enough to prevent him from telling lies and committing other crimes, how can then only fasting stop him from these moral crimes? Is fasting bigger than concept of Allah itself?

Thus, this Islamic morality during the month of Ramadhan is "ARTIFICIAL" and only a deception.  Even if we assume that there is any change, then it is temporary and disappears after the fasting is over. That is why Islamic countries have the huge culture of corruption throughout the year.

As compared to the Islamic countries, we have an atheist country like Japan, which is the most HONEST society on the planet earth. Japanese citizens handed over a record ¥3.9 Billion in Lost Cash to the Tokyo Police in 2019 (link).  While the Morality of atheist Japanese is based upon the education of "Humanity", which is permanent.

Muslims are not allowed to have sex with their wives during the fasting period. Upon that Islam apologists claim that Muslims learn sexual control upon them through Fasting.

This argument is also useless. Sex is not a bad thing that one has to abstain from it. Why should one try to crush sexual urges without any logical reason?

And non-religious West "educates" people to respect the choice of their partners, and if their partner is not ready for the sex, then they have to control upon their sexual urge. It is much better than Islamic fasting for sex-control, in which people are not allowed to do sex according to the demand of nature during the fasting period. But after the fasting period, Muslim men are allowed to commit the marital rape of their wives and show no respect to the choice of their wives.

Islam apologists: Middle East has low rate of cancer due to fasting

Islam apologists present the following video (link) as their proof, in which it is claimed that middle east has less rate of cancer than other world, and one reason could be Islamic fasting.

Islam apologists have not answered the points that have been raised in the post itself.

Running towards this youtube video is also not going to help Islam apologists, while:

And intermittent fasting is good for health, but it is different than Islamic fasting.

If any person (even if he is a non-Muslim) eats and drinks in public, then Islamic countries punish him in name of blasphemy against Islamic Fasting.

And Muslim logic for punishing that person is that he hurt the feelings of other Muslims who were fasting by eating/drinking in front of them and not showing respect to Islamic practices.

Muslims are strange that they get angry upon others only after fasting for 12-15 hours for eating/drinking in front of them, and they want to beat them and to punish them for it.

On the other hand, these are poor children who have been suffering from hunger for years and years, but thanks that they don't apply the Muslim logic here, otherwise they have to set the houses of Muslims in fire for their Iftar parties and all the delicious food they eat at Suhur (سحر) and Iftar. And these poor children also have to set all the restaurants on fire for selling roasted chicken and Kebabs and barbecues openly, while they are hurting these poor children by doing so. 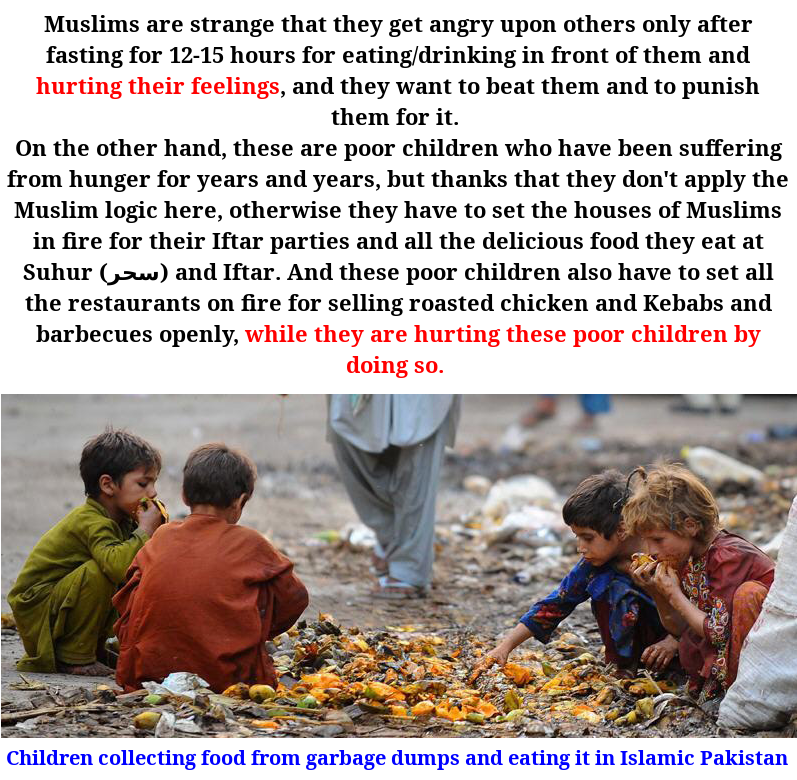 Actually, even Quran and Sunnah themselves never ordered to punish people for eating in front of fasting Muslims (link):

Sheikh Mohamed Abdullah Nasr, coordinator of the al-Azhar (University) Scholars for a Civilian State Front, said there is no proof in the Quran or the Sunnah - the prophet’s teachings - of the presence of an entity that penalized people who did not fast during Ramadan. “The prophet himself said Muslims fast for God so only God can penalize those who don’t,” he said. “The prophet never even scolded those who did not fast.”

But today Muslims have gone even more extreme than Quran and Sunnah themselves, and they are inventing NEW laws at their own in name of respect of Ramadan and Islamic practices. And not showing this so-called respect automatically means blasphemy and then brutal beating and punishment.

Muslims first beat innocent people in name of blasphemy against Ramadan, and then police arrest the poor people and then Judiciary fine them and sent to the prison.

When rich people have to fast, then they understand the hunger of poor people too, and they help poor people more.

If someone is crippled, then we don't need to break our leg too in order to understand his sufferings.

It is not necessary to stay hungry and thirsty in unnatural and harmful way of Islamic fasting, but it is enough to think about the poor people and feel the humanity.

This is the reality of Islamic fasting of Ramadan as far as poor people are concerned.

Ramadan is indeed a torment for the poor.

Muslim come up with this excuse:

If you live in an Islamic country, then you should also follow its law. If it prohibits eating & drinking in public, then you should follow it and there is nothing wrong in it. Or that only applies to Christian and western nations, and only Muslim are demanded to follow their laws if they have to live there?

If secular western countries make a law to ban Preaching of Islam, will Muslims then follow it, or will they protest against it while claiming it to be against the basic human rights?

Are you not able to see your Double Standards here?

Eating and Drinking is a Basic Human Right, and no Law should be made to usurp this basic human right from them. Neither by religion, nor by their followers.

Next Muslim excuse is:

Only citing French law about partial ban upon Hijab (i.e. only in schools for girls under the age of 18) and then taking shelter behind it for all the crimes against humanity in Islamic countries (like blashphemy laws and Ramadan laws etc.) is futile.

Firstly, France Hijab ban is controversial even among the Secularists themselves.

The line of reasoning for French decision is this that CHILDREN should be protected against the Brainwashing by anyone (including religious brainwashing from their parents too). It is a great injustice against children to let them become the prey of this brainwashing in their childhood.

That is why there is already a movement which is demanding a ban upon all such brainwashing and religious practices which are forced upon the children from their parents (like taking them to mosques, churches, Hindu temples etc.).

But when these children become 18 years old, then they will be fully allowed to read and decide for themselves which ideology they want to follow, including Hijab and Islam.

In this system, all children and all parents have equal rights as human beings. It is not like Islamic system, which is an Unjust system, which allows only Muslims to preach non-Muslims, and to publish all kinds of book criticizing other religions/ideologies, but does not allow non-Muslims to criticize Islam or to publish books against Islam, or to preach their ideology to Muslims.

All this happens due to the double standards of Muslims.