Part 5: Warning, Muslims will revive Slavery again as soon as they get the power

Whenever religious Muslims get the power, and they succeed in establishing an Islamic Caliphate, then it will become obligatory upon them to wage “Jihad” against all the non-Islamic States.

And as soon as “Jihad” revives, then “Islamic Slavery” will also revive automatically along with it (as the captive women and children of the non-Muslims will be made slaves after the war)

You will find this same ruling, in the fatwa of Saudi Grand Mufti Sheikh Saleh al-Fawzan, who is openly declaring that institutions of Jihad and Slavery will revive automatically with the establishment of an Islamic Caliphate.

https://en.wikipedia.org/wiki/Saleh_Al-Fawzan
In the tape he was quoted as saying, “Slavery is a part of Islam ... Slavery is part of jihad, and jihad will remain as long there is Islam.” As for the modernist interpretation that Islam totally abolished slavery, he dismissed its exponents saying, “They are ignorant, not scholars. ... Whoever says such things is an infidel.” 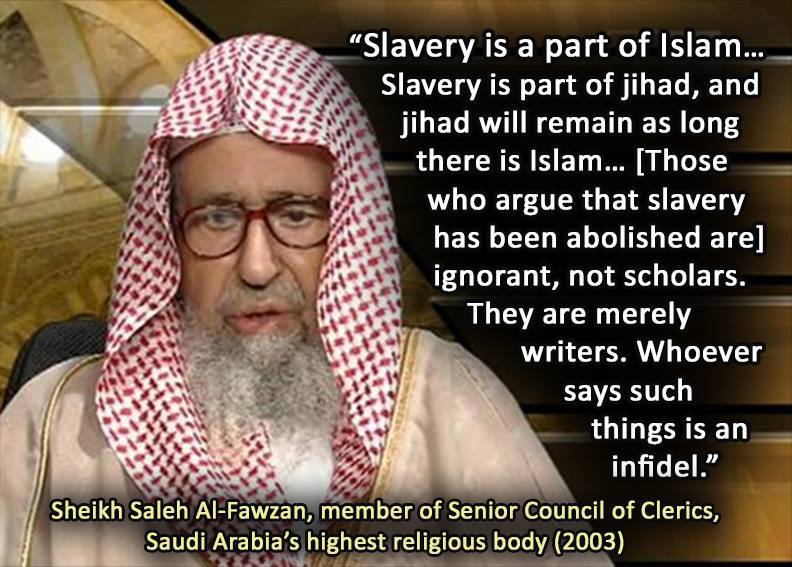 Slavery in modern times by ISIS … Who is responsible?

There is one thing “Problem”.

While another thing is “Mother of all Problems”, which is actually responsible for all the other secondary problems.

ISIS took the Yazidi captive women as slave women. Muslims blame it upon ISIS. But the question is, if really ISIS was the sole responsible for this crime?

No, ISIS was not the sole responsible, but this problem also arose from the Religion of Islam, which acted as “mother of all problems”.

ISIS openly claim that all those Muslims who say that slavery is illegal, then all these Muslims have become Kafirs, while they are declaring the Halal of Allah (i.e. slavery) as Haram on their own.

It is not ISIS, but writer of Quran himself, who claims that only Allah has the right to make the laws in Sharia, and no human is allowed to change these laws. And whoever does it, then he becomes a Kafir.

All Muslims are helpless in front of this argument of ISIS, and they have no answer.

There were more than 200 major movements in Human History, which tried to abolish slavery. You can read the timeline of these movements here:

But you will not find a single movement from Muslims in this long list of movements against the slavery.

It is said about Islam that it is not possible to “reform” this religion. And you could see the proof of this in case of slavery, where not even a single movement was initiated by Muslims in order to end the slavery.

Muhammad turned Muslims into Zombies. It is not allowed for these Zombies to change/reform any law of Sharia. Since slavery was made Halal by Allah, they believe that no human is allowed to make it Haram (prohibit) now.

When the non-religious West started the movement to end the slavery on the global level, then Muslims were the people who opposed this movement the most.